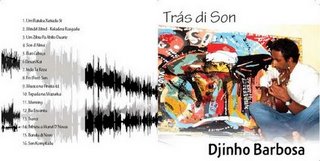 “My best friends believed that I had to share my music with a more broad audience. After that, Paulino Vieira kind of gave me a green light. Then, Kim Alves gave me the conditions for audio recording at K Magic Studio. At the end it became a Trás di Son movement,” Djinho tells CVMusicWorld.com.

According to Djinho, Trás di Son,” an inviting 15-track record, fetches coladeira, morna, mazurka, batuco, funaná but does not qualify as a typical traditional album because of the diversity of the sounds and the musicians involved who all added their different experiences.

Released in April in Cape Verde, “Trás di Son” is supposed to be available in the United States and other parts of the world. Says Djinho: “The distribution has been difficult. It seems that the producers are interested just in the projects they finance themselves. I need someone interested who will make it available in CV communities. I really would like to give everyone the chance to listen to this album.”

One of the founders of the band Abel Djassi, Djinho was also part of the legendary group Finaçon before joining Quarteto em Si. He is part of the musicians from the 80s who actively participate in the evolution of the music of Cape Verde.

With “Trás di Son,” Djinho harmonizes, with the help of musicians (friends) from different generations, the new and the old sounds. “With his album, I wanted to do something close to silence or to be quite. I believe people need, in our music too, time to listen to music when they are home, in the car and so on,” Djinho concludes.

Popular posts from this blog